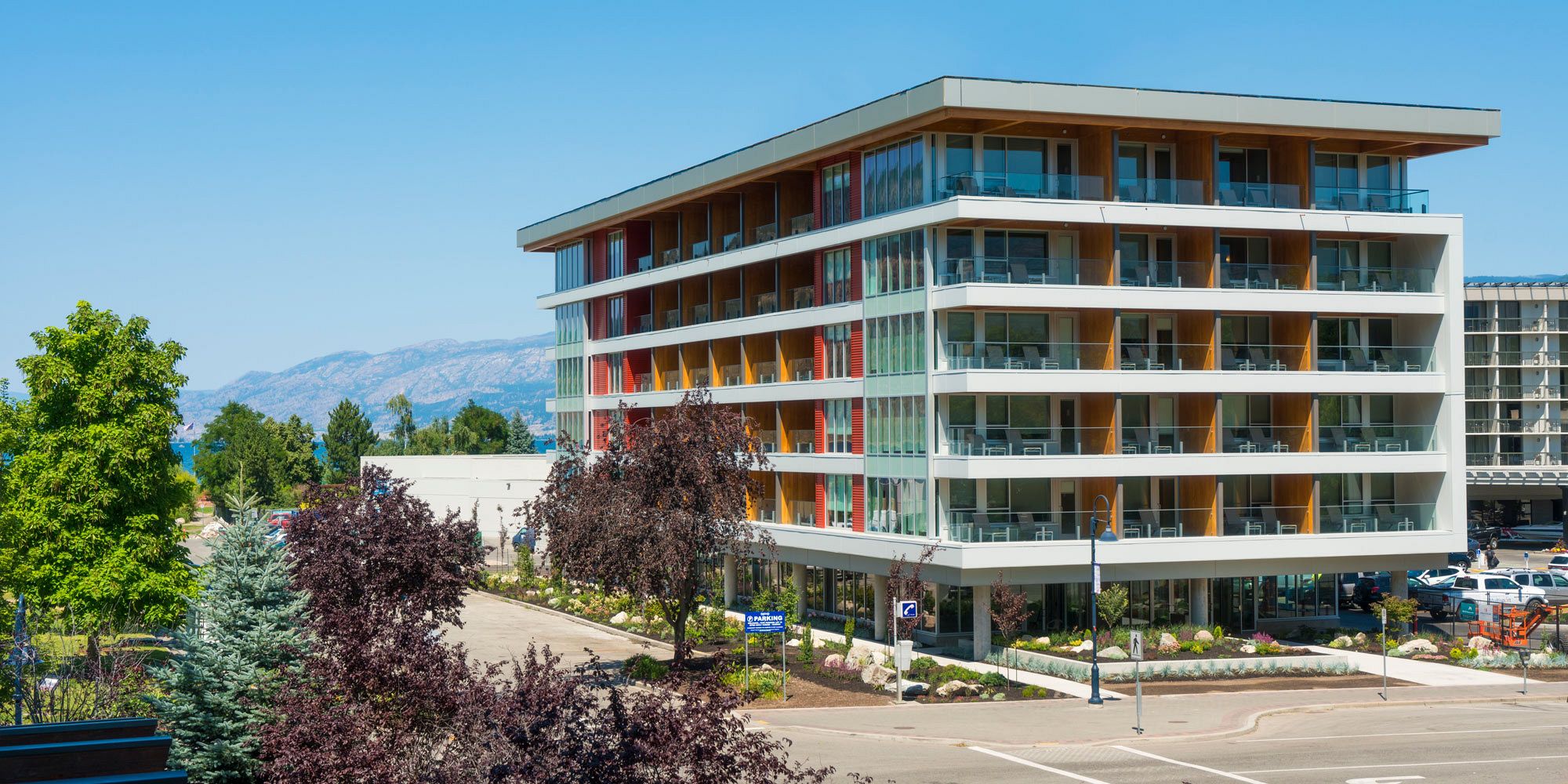 The 6-storey, 70-unit hotel building, is constructed of mass timber. It is believed to feature the most extensive use of cross-laminated timber (CLT) panels in any building in the Okanagan.

The West Wing at the Penticton Lakeside Resort and Conference Centre is a modern, iconic addition to Penticton’s waterfront.

The 6-storey, 70-unit hotel building, is constructed of mass timber. It is believed to feature the most extensive use of cross-laminated timber (CLT) panels in any building in the Okanagan.

Great care was taken in order to carry out the Architects intent to emphasize and highlight the wood structure. Wood also functions as the primary finish throughout the building. CLT panels were produced locally by Structurlam and are used in all major shear elements of the building. They are used in the floor and roof, and in the vertical walls that separate decks on the exterior. The building also features exposed wood ceilings, large glulam columns and beams, wood stairs and stair shafts, and more throughout the building’s interior design.

The use of wood in construction can allow for a quicker build than traditional concrete structures. It also has sustainable advantages. Wood provides less of an environmental footprint than a concrete or steel building, the carbon that makes up about half of Wood’s composition, remains in the material rather than being expelled into the atmosphere. The Penticton Lakeside’s West Wing, will save the equivalent of approximately 1,000 vehicles emitting carbon for one year. In addition, all the wood supplied for the project was sourced from certified sustainably managed forests. Care was taken during construction to mitigate environmental impacts and exceed environmental regulations.

This beautiful building has achieved the 2017 Hospitality Award of Excellence from the Thompson Okanagan Commercial Building Awards. 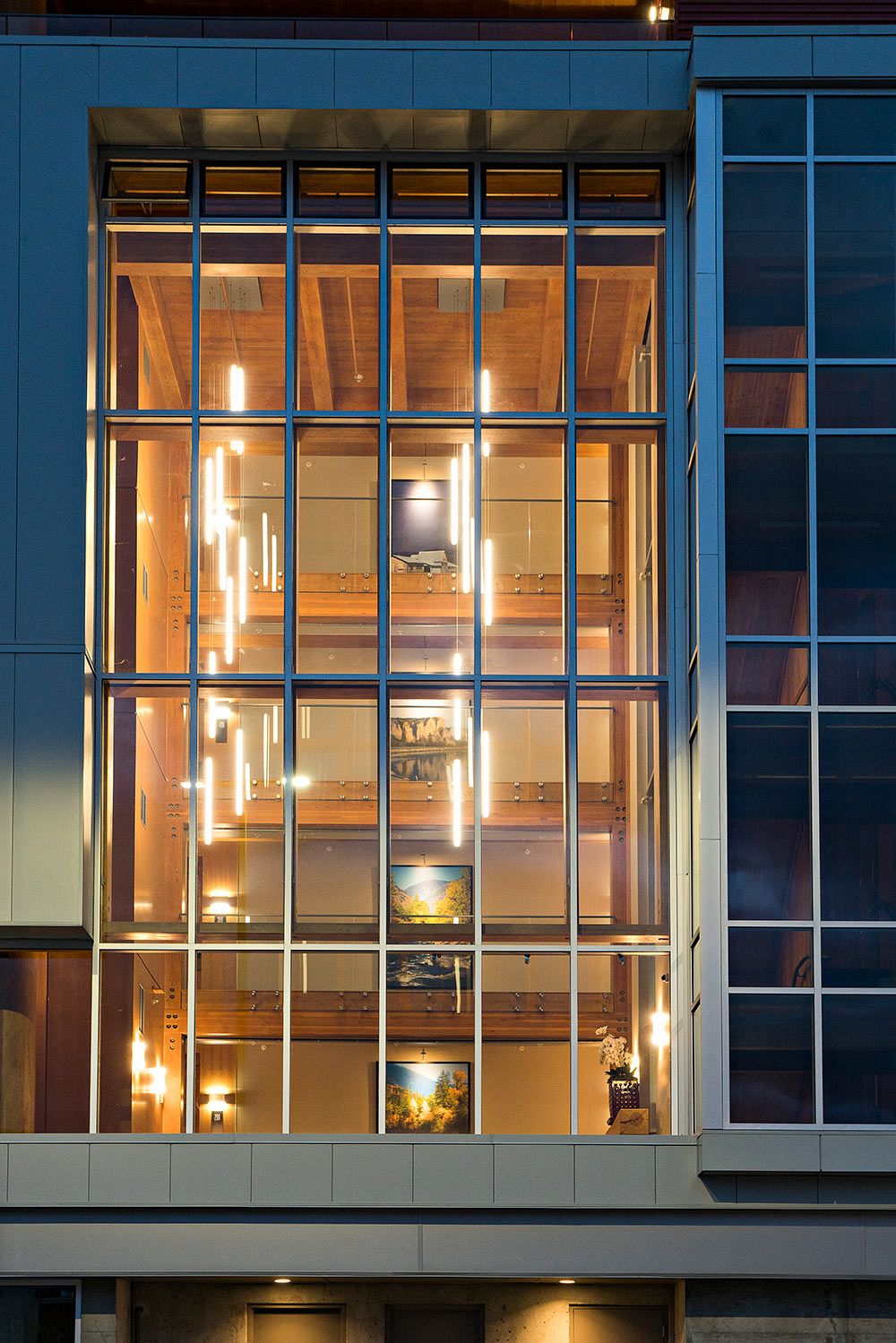 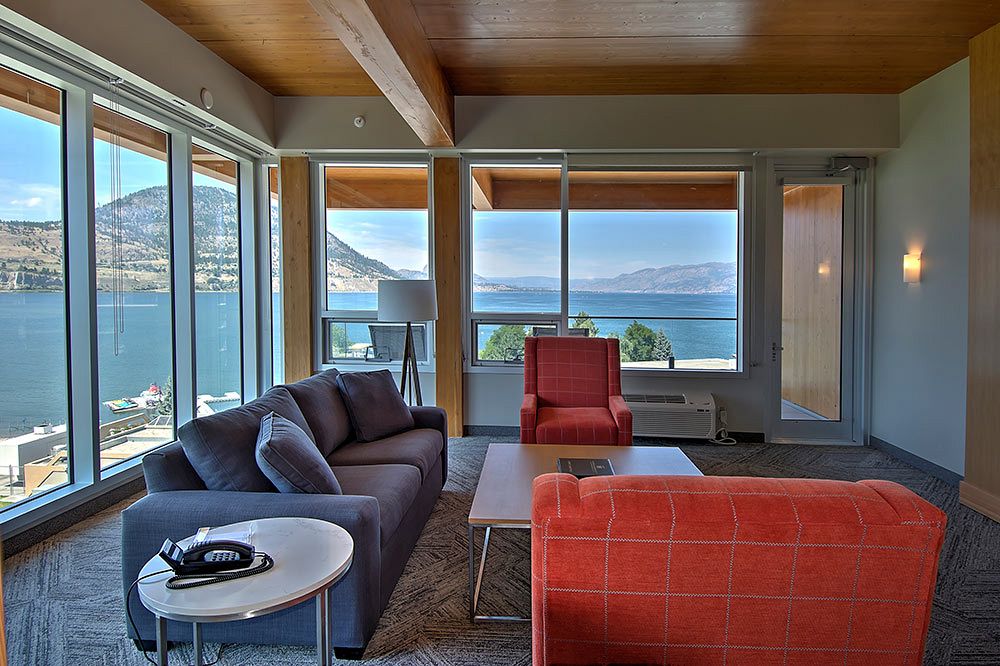 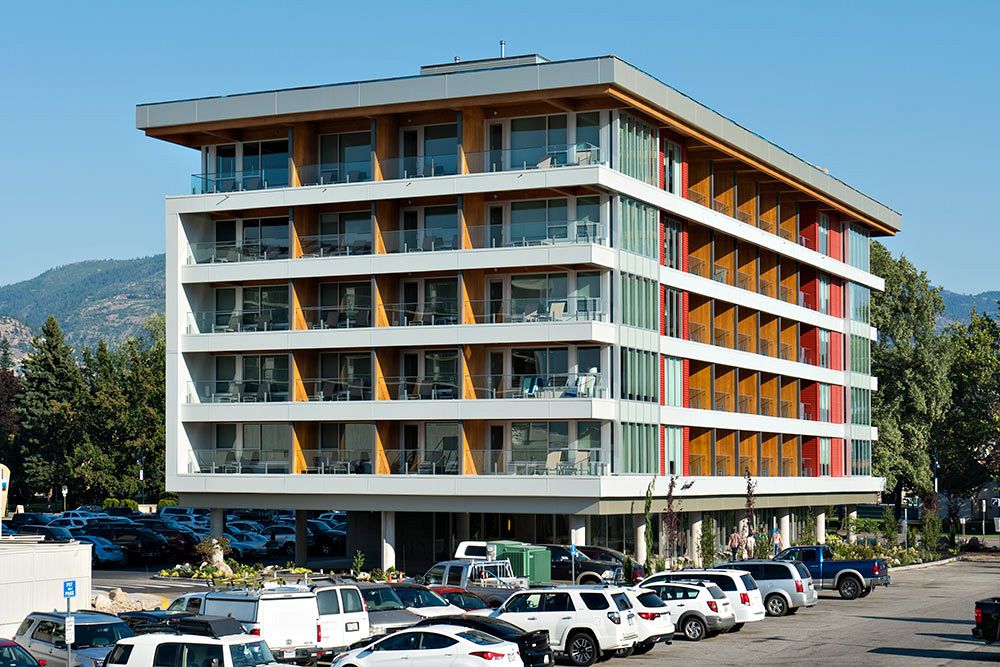 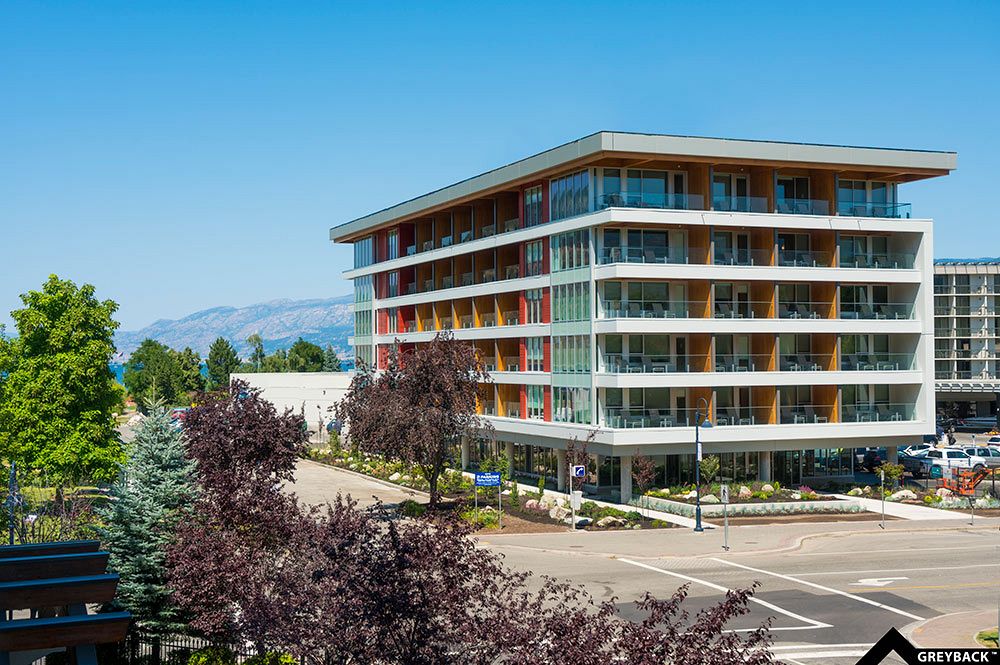 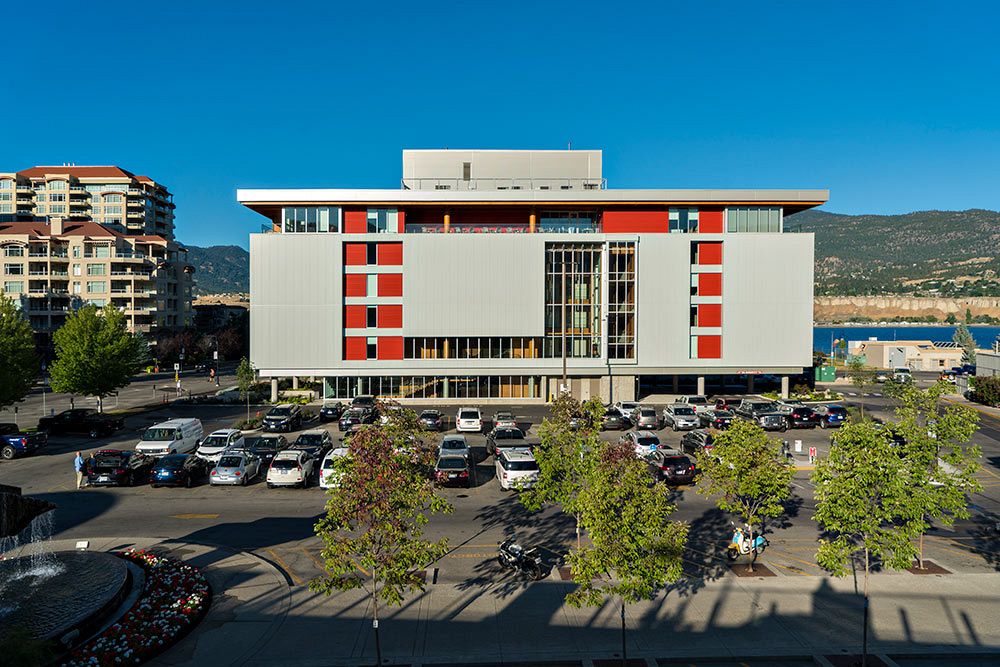 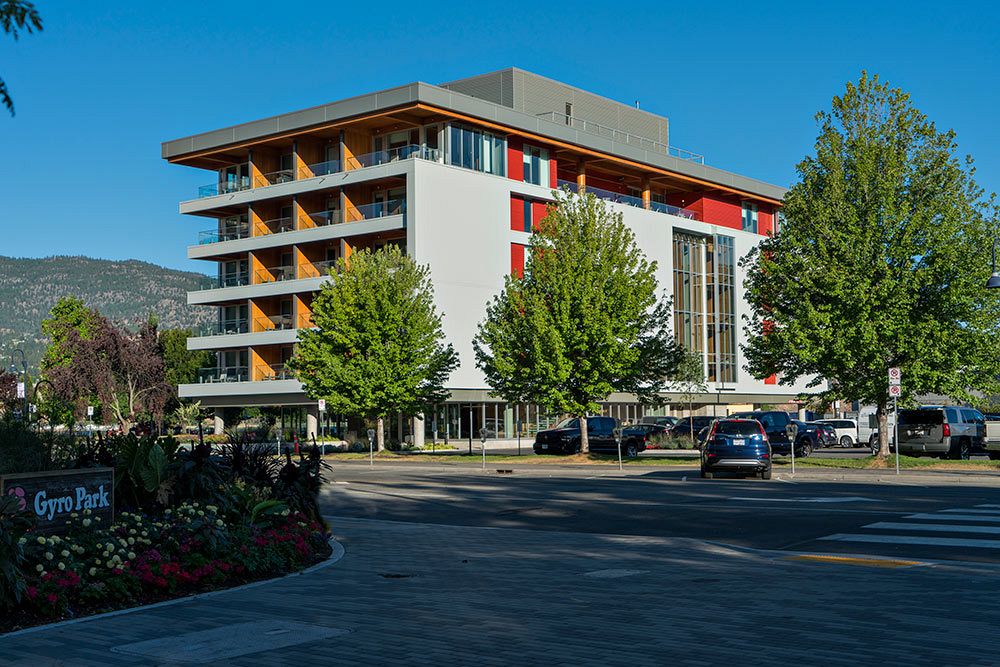 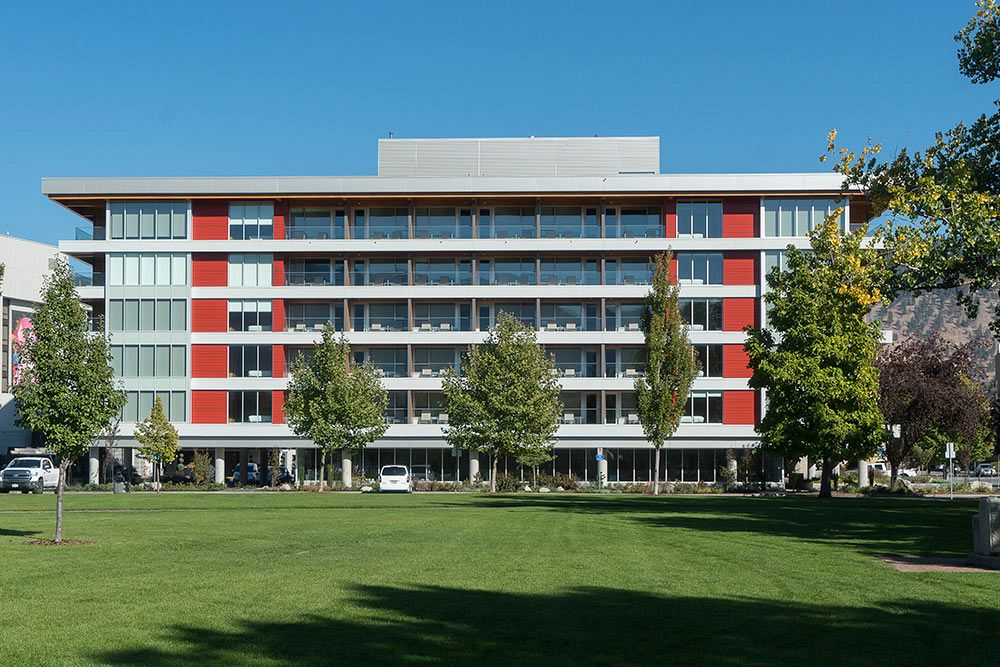